Solutions you can not find elsewhere 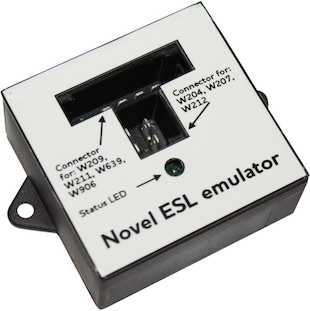 - Has a Status LED to indicate to the user when the emulator is transmitting and receiving data.

(Not a piezo sounder). This Status LED also enables the user to know when the EZS has

to make our emulator work on these Older vehicles, it is simply “Plug and Play”

- When it is required to use our emulator on the the later vehicles W204/W207/W212 then our emulator must first be personalized.

This can be performed using any HW / SW Tools that supports W204/W207/W212 ESL Personalization. Our Emulator uses the

from the EZS and also from the dealers “Blue Workshop Key”

- When our emulator is used with our “EZS Reader Software” it can be personalized Via IR without the need of any additional tools.

the status LED will turn “ON” solid for 1 second, then it will blink either once or twice to indicate the current operating mode.

- We also use the Status LED to indicate when a “Successful Authentication” between the EZS and our emulator occurs.

status LED solid for 2 seconds. You will see this happen when you insert a matched Key into the EZS and turn the key to the “Starter

emulators response hence allowing the vehicle to run. If the ESL Password stored inside our emulator is not a cryptological match

with the Password stored inside the EZS, then the Status LED will not respond when the key inside the EZS is turned to the “Starter

Position” and the vehicle will not be allowed to run.

- As described earlier in this document, the default operating mode of our emulator is “OLD ESL Mode”

- If some situation should arise when our emulator has been installed and personalized to one of the later vehicles such as the W204,

and the user wishes to remove our emulator from this vehicle and install it into one of the older vehicles such as the W906, then the user

manner as a “Real NEC type ESL” by using a Dealer Password (-101 Hash) This will also return our emulator to the default operating mode.

Go to our products
Go to Home